My childhood was not an easy one and I endured many hardships. Despite it all, I pushed myself to get straight A’s, study hard and participate in after school activities like marching band. But I felt like I had no sense of self beyond my drive for success. I had always been expected to succeed on the path I set for myself and had defined this success as a necessary goal. However, other plans were in store for me.

I began working in the medical field when I was 14 as a candy striper and, when I was old enough, I participated in a youth apprenticeship program. I took certified nursing assistant classes and worked in the emergency department until I graduated from high school and began college shortly after. During college, my dad became very ill and my mother needed help with our expenses, so I made the tough decision to drop out of college.

In the time in between initially attending college and returning, life happened. Shortly before I was married, I was diagnosed with cancer. Three months after getting married, I returned to the doctor to begin treatment. The doctor had to perform many tests to make sure I was ready for the next step and, in doing so, determined that my cancer was cured … and I was pregnant!

I found my way back to school and graduated from Northwest Technical Institute as a surgical technologist, where I now teach. I also joined the Arkansas State Assembly of the Association for Surgical Technologists (AST) several years ago, and serve on the Assembly’s Board of Directors. My heart for service, especially helping those with their medical care, has also led me to be an active volunteer for many organizations in my community over the years, including my church.

I’m now the mother of two teenage daughters and will be the first in my family to earn an associate degree. It has taken me almost 20 years but I am almost there. I have not given up, and I choose to never quit. 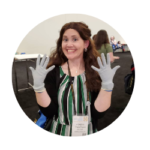